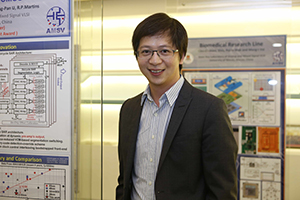 The Institute of Electrical and Electronics Engineers (IEEE) has released its 2019 fellow list. Prof Elvis Mak Pui In from the University of Macau (UM) has made the list, for his contributions to the fields of radio frequency and analog circuits. He is the first native of Macao to receive this prestigious honour.

IEEE is an international association of engineers in the fields of electronics technology and information science, with more than 420,000 members in over 160 countries. The total number of IEEE fellows selected each year cannot exceed 0.1 per cent of the total voting membership. The 2019 list includes 295 new fellows, 30 of whom are scientists from China. Prof Mak belongs to the youngest category (in the 31-39 age bracket), which is very rare.

Prof Mak is the associate director (research) of the State-Key Laboratory of Analog and Mixed-Signal VLSI at UM and a professor in the university’s Department of Electrical and Computer Engineering. He is recognised internationally as one of the foremost scholars in the field of integrated circuits, with over 260 published papers. 20 of these papers have been presented at the IEEE International Solid-State Circuits Conference, which is hailed as the 'Chip Olympics'. Earlier this year, he was appointed an overseas expert of the Chinese Academy of Sciences and a fellow of the Institution of Engineering and Technology (IET) of the United Kingdom for his contributions to engineering research, education, and services. The IET is one of the world's largest engineering institutions with close to 170,000 members in 150 countries.

Born in Macao, Prof Mak received his early education in St Teresa's School (Escola de Santa Teresa) and Salesian Institute (Instituto Salesiano). Afterwards, he obtained his bachelor's and doctoral degrees in electrical and computer engineering from UM, in 2003 and 2006, respectively. He has since been a faculty member at UM. Prof Mak is currently the chairman of the IEEE Circuits and Systems Society’s (CASS) Distinguished Lecturer Programme. He has served as the associate editor, guest editor, or senior editor of seven IEEE journals, as well as an editorial board member of the IEEE Press. He was also a Distinguished Lecturer of both the IEEE CASS and the IEEE Solid-State Circuits Society.

Copyright © Department of Electrical and Computer Engineering.
Faculty of Science and Technology, University of Macau.
All rights reserved.