Home | News & Events | Contact Us
Seminar
Back to Seminar Index
AI: A Networking and Communication Perspective

Recent breakthroughs in artificial intelligence and machine learning, including deep neural networks, the availability of powerful computing platforms and big data are providing us with technologies to perform tasks that once seemed impossible. In the near future, autonomous vehicles and drones, intelligent mobile networks, and intelligent internet-of-things (IoT) will become a norm. At the heart of this technological revolution, it is clear that we will need to have artificial intelligence over a massively scalable, ultra-high capacity, ultra-low latency, and dynamic new network infrastructure. In this talk, we will provide a simple overview of AI for the perspective of networking and communications and share some interesting applications. In addition, we will also share some of our preliminary works in this area. 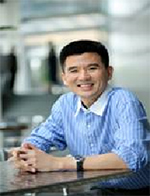 Copyright © Department of Electrical and Computer Engineering.
Faculty of Science and Technology, University of Macau.
All rights reserved.