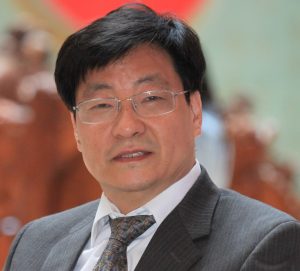 Dr. Cheng-Zhong Xu, IEEE Fellow, is the Dean of Faculty of Science and Technology and the Interim Director of Institute of Collaborative Innovation, University of Macau, and a Chair Professor of Computer and Information Science. He was a professor of Wayne State University and the Director of Institute of Advanced Computing of Shenzhen Institutes of Advanced Technologies, Chinese Academy of Sciences before he joined UM in 2019. Dr. Xu is a Chief Scientist of Key Project on Smart City of MOST, China and the principal investigator of the Key Project on Autonomous Driving of FDCT, Macau SAR.

Dr. Xu’s main research interests lie in parallel and distributed computing and cloud computing, in particular, with an emphasis on resource management for system’s performance, reliability, availability, power efficiency, and security, and in big data and data-driven intelligence applications in smart city and self-driving vehicles. The systems of particular interest include distributed systems and the Internet, servers and cloud datacenters, scalable parallel computers, and wireless embedded devices and mobile edge systems. He published two research monographs and more than 300 peer-reviewed papers in journals and conference proceedings; his papers received over 10K citations with an H-index of 58. He was a Best Paper Nominee or Awardee of the 2021 ACM Symposium on Cloud Computing (Socc’2021), 2013 IEEE High Performance Computer Architecture (HPCA), the 2013 ACM High Performance Distributed Computing (HPDC), IEEE Cluster’2016, ICPP’2005, GPC’2018, UIC’2018, AIMS’2019, IEEE Edge’2020. He also received more than 100 patents or PCT patents and spun off a business “Shenzhen Baidou Applied Technology” with dedication to location-based services and technologies. Dr. Xu received the most prestigious “President’s Awards for Excellence in Teaching” of Wayne State University in 2002.