This event has passed.

Image authentication can be used in many fields, including e-government, e-commerce, national security, news pictures, court evidence, medical image, engineering design, and so on. Since some content-preserving manipulations, such as JPEG compression, contrast enhancement, and brightness adjustment, are often acceptable—or even desired—in practical application, an authentication method needs to be able to distinguish them from malicious tampering, such as removal, addition, and modification of objects. Therefore, the traditional hash-based authentication is not suitable for the application. As for the semi-fragile watermarking technique, it meets the requirements of the above application at the expense of severely damaging image fidelity. In this talk, we propose a hybrid authentication technique based on what we call fragile hash value. The technique can blindly detect and localize malicious tampering, while maintaining reasonable tolerance to conventional content-preserving manipulations. The hash value is derived from the relative difference between each pair of the selected DCT coefficient in a central block and its counterpart which is estimated by the DC values of the center block and its adjacent blocks. In order to maintain the relative difference relationship when the image undergoes legitimate processing, we make a pre-compensation for the coefficients. Finally, we point out the direction using deep leaning technique for image authentication. 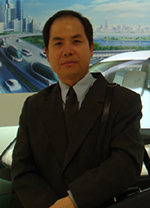 Prof. Yulin Wang is a full professor and PhD supervisor in the School of Computer Science, Wuhan University, China. He got PhD degree in 2005 from University of London, UK. Before that, he had worked in National Institute of Research and Huawei@ for more than ten years. He has involved more than 20 national and international research projects, and hold 8 patents. He got his master and bachelor degree in 1990 and 1987 respectively from Xi-Dian University, and Huazhong University of Science and Technology, both in China. His research interests include image and video processing, software engineering, information security and artificial intelligence. In recently 10 years, Prof. Wang has published as first author 3 books, 40 conference papers and 45 journal papers, including in IEEE Transactions and ACM Transactions journals. Prof. Wang served as editor-in-chief for International Journal of Advances in Multimedia in 2010. He served as reviewer for many journals, including IEEE Transactions on Image Processing, IEEE Transactions on CSVP and IEEE Transactions on Multimedia. He served as reviewer for many research funds, including National High Technology Research and Development Program of China (‘863’ project). Prof. Wang was the external PhD adviser of Dublin City University, Ireland during 2013-2016. He has served as chairman and keynote speaker at more than 30 international conferences since 2008. He bas been listed in Marcus “who’s who in the world” since 2008. He was selected as scientific and technological innovative talents in Hubei Province in 2014. Since 2012, he has served as Deputy Director of Hubei Science and Technology Commission of China Association for the Promotion of Democracy (CAPD).

Department of Computer and Information Science