‘UM is the closest place to my heart.’ Prof. Iu Vai Pan shares over three decades of experience in education
「澳大是我感覺上最接近的地方」 姚偉彬教授分享30多年育人足跡

Over the past 33 years, Prof. Iu Vai Pan has contributed to his birthplace Macau in many different roles: he became the first assistant professor of civil engineering at the University of East Asia (UEA), the predecessor of the University of Macau (UM), in the late 1980s, took over as the university’s rector in 1999, and has been exploring a new model of residential colleges since 2010. He did not have a long-term career plan at the outset, but now, looking back over three decades, he has laid the foundation for the development of the university with every step he has taken.

The First Assistant Professor of Civil Engineering at UM

In 1975, after graduating from the Choi Ko Middle School in Macau, Iu went on to pursue undergraduate studies in the Department of Civil Engineering at the Hong Kong Baptist College (now the Hong Kong Baptist University), before travelling to the United Kingdom to pursue a master’s degree in structural engineering at the University of Southampton. He received his PhD in Civil Engineering from the University of Hong Kong (HKU) and went on to do post-doctoral research at the University of Calgary, Canada. ‘After completing my post-doctoral research, I found a research job with the National Nuclear Corporation in the UK, which mainly focused on the study of the effects of explosions on the structure of nuclear power plants, a very interesting topic,’ he says. ‘Unfortunately, I was unable to do so due to work permit problems, so I returned to HKU to do research. Then I heard that UEA was planning to launch an engineering programme, so I returned to Macau and applied for the job.’

Prof. Iu returned to Macau in 1988 to join the Polytechnic College at UEA, where he taught computer science and was invited by then vice rector, Prof. Li Tianqing, to sit on the installation committee for developing a civil engineering programme. In 1989, the Faculty of Science and Technology was established, and a four-year Bachelor of Civil Engineering degree programme was launched. Prof. Iu began teaching civil engineering as the university’s first assistant professor in the field and the first coordinator of the programme, which attracted a dozen students. ‘I can’t say that I was actively planning anything for the university in the process, I just felt that my knowledge could be put to good use, so I agreed to be a pioneer,’ says Prof. Iu.

‘I taught my first class of civil engineering students for four years until they graduated, and after spending four years together, we grew very close,’ says Prof. Iu. Among the first batch of graduates he taught, some stayed at the university as teaching assistants while studying for a master’s degree, but he encouraged them to leave. ‘To put it crudely, I wanted to kick them out,’ he explains. ‘It’s not because I thought our university was not good enough, but because I wanted them to study elsewhere so they could broaden their horizons, experience different cultures, and become more open-minded,’ he says. Back then, many students were encouraged by Prof. Iu to study in overseas institutions, and several of them eventually returned to Macau to become his colleagues.

In mid-1999, when the then rector, Prof. Zhou Ligao, was reaching retirement age, the Portuguese Macau government was considering candidates for the next rector. One day, UM Vice Rector Prof. Rui Martins called him and told him that Dr Jorge Rangel, then secretary for public administration, education and youth, wanted to meet him. Prof. Iu thought it was about something else, but when they eventually met, Dr Rangel told Prof. Iu that he wanted to recommend Prof. Iu as the next rector of the university and asked what his plans would be for the university after he took office.

Unfazed by the unexpected appointment and, in his heart of hearts, also feeling it was a rare opportunity, Prof. Iu confidently shared his thoughts on the future development of the university during the short meeting with the secretary.

In August 1999, at the young age of 42, Prof. Iu was inaugurated as the new rector of the university at the inauguration ceremony for the 1999/2000 academic year. He opened his inauguration speech with a quote from Sir Isaac Newton, which struck a chord with those present: ‘If I have seen further than others, it is by standing on the shoulders of giants.’

Prof. Iu believes that engineering has trained him to think logically and to see that things have to be constructed step by step. ‘What others have done before me is very important, and I have my own direction, but it must be done step by step,’ he says. ‘There must be a foundation, and we have to understand what is feasible and what we have to establish before we can proceed further. In the establishment and development of a university, nothing is achieved overnight. Everything takes meticulous planning, down to the last detail.’

One of Prof. Iu’s priorities during his tenure was to raise the quality of the faculty team. When he took over as the rector, only about 40 of the university’s 200 faculty members had PhDs, but he believed that for the university to make progress, the priority was to raise the qualifications of faculty members. ‘We could either hire new people or train current faculty members, and I thought we should do both,’ says Prof. Iu. ‘So we raised academic requirements in the recruitment process, while at the same time providing opportunities and support for our colleagues to study for a PhD. Only when our faculty members have a better academic foundation can we provide better-quality education and produce better-quality research results. A tall building begins with a good foundation.’

Prof. Iu also places great emphasis on attracting outstanding students in the hope that this will encourage other students to strive for excellence. ‘Some students might think that they were doing well, but then they found out that there were students at the university who were more diligent, which fosters learning culture for other to follow and to achieve better results.’ So he continued the Principals’ Recommended Admission Scheme, which had been launched by Prof. Iu’s predecessor Prof. Zhou Ligao during the last year of his tenure. Under this scheme, outstanding high school graduates in Macau could apply for admission to the university with exemption from the entrance examination upon recommendation from their school principals. ‘Fortunately, during my nine years as the rector, the number of local secondary school graduates increased, which enabled the university to recruit more outstanding students, but it also meant that competition for admission to the university became increasingly fierce.’

In December of the same year, a few months after Prof. Iu took over as the rector, Macau was reunited with the motherland. Since then, the university has been allowed to admit students from the mainland, a few provinces, and cities at first, and gradually gaining approval to recruit from all provinces, cities, and autonomous regions. ‘In the first two or three years after the handover, we required candidates to reach the admission scores of second-tier universities in the mainland,’ says Prof. Iu. ‘Around 2002 and 2003, I proposed applying the admission scores of first-tier universities in recruiting mainland students. Later, some of our programmes raised the bar further. This shows UM’s leading position in the higher education sector in Macau.’

Juggling the Dual Roles of Rector and Professor

For seven years during his tenure as the rector, from 1999 to 2008, Prof. Iu continued teaching undergraduate and postgraduate courses and supervising postgraduate students. ‘According to the Charter of the University of Macau, the rector may be exempt from teaching unless he or she offers to do so. I chose to interpret this statement in a positive way, as a reminder that I could continue to teach,’ says Prof. Iu. ‘I was 42 years old at the time, and I felt that I would not remain a rector for the rest of my life and that I had to continue teaching. Moreover, if the university’s leadership, such as the rector and the faculty deans, continued to teach, they would stay in close contact with the students and would be able to understand the thoughts and ideas of frontline teachers, which would help them formulate better development policies for the university.’

However, for Prof. Iu, the greatest motivation to keep teaching is the joy he derives from it. ‘The joy of teaching is like the joy a parent feels when nurturing their children, and I didn’t want to lose that joy,’ he says. ‘As the rector, I got tired from time to time when I had to deal with a lot of administrative work, so it was good to get away from work and go to the classroom. It helped restore my inner equilibrium.’

Appointed as the Master of a Residential College

After retiring from his post as the rector, Prof. Iu continued to teach civil engineering. In 2010, he served as a visiting scholar at the University of Cambridge in the UK for six months. At the time, UM was preparing to launch a residential college system on a trial basis, so Prof. Iu took the opportunity to experience the atmosphere and the operation model of residential colleges at Cambridge. After returning to UM in August of the same year, he applied to be the founding master of the East Asia College (now the Stanley Ho East Asia College)

On the day of our interview, Prof. Iu explained the ideas behind the college’s emblem, which he had put a lot of thought into designing. ‘Our emblem has a bridge that symbolises the link between Eastern and Western cultures,’ he says. ‘The waves represent the university’s location in the waters of East Asia, and the Chinese character ‘雧’ refers to a flock of birds gathered on a wood, embodying the idea of the college’s community life.’ Looking back on his 11 years of living and teaching in the college, he sees the college as a learning community that provides opportunities for students to learn about themselves and the world. ‘I can be close to the students, witness their growth at close range, and see their learning outcomes in many different ways,’ he says.

‘The University Is Part of Me.’

The year 2021 marks the 40th anniversary of the university’s founding and the 39th year of Prof. Iu’s teaching career, of which he has spent 33 years at the university and has long considered it his home. ‘UM is the closest place to my heart,’ he says. ‘I won’t say that I’m part of the university, because the contrary is true—I feel like the university is part of me. It is impossible to separate my identity from what I have experienced in the past four decades and what I have done here. Whether the university is called the University of East Asia or the University of Macau, whether I am a professor of civil engineering, the rector or the master of a residential college, my most distinguishing identity is simply that I am a member of this university.’ 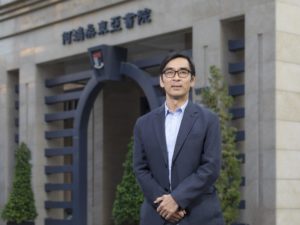 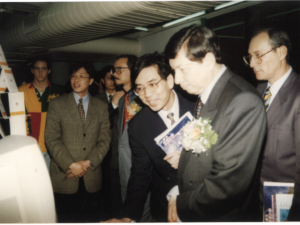 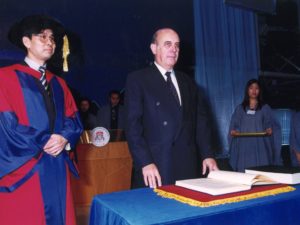 Prof. Iu Vai Pan (left) is appointed as the rector of the University of Macau by the then governor of Macau, Vasco Joaquim Rocha Vieira (centre), in August 1999.
姚偉彬教授（左）在1999年8月獲時任澳門總督韋奇立（中）委任為澳大校長 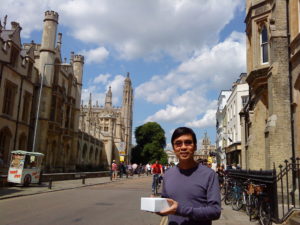 Prof. Iu Vai Pan at the University of Cambridge as a visiting scholar
姚偉彬教授攝於劍橋訪學期間 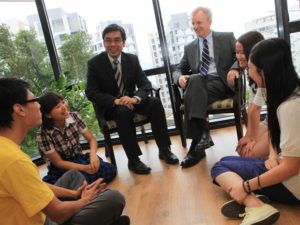 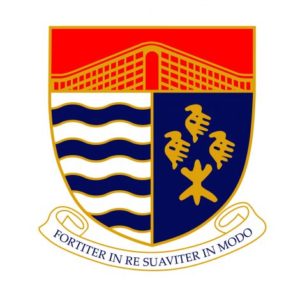 The emblem of the Stanley Ho East Asia College
何鴻燊東亞書院院徽 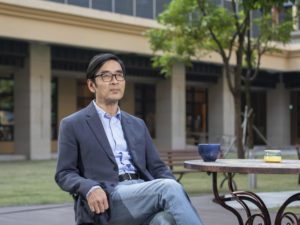 Prof. Iu Vai Pan enjoys sitting in the courtyard of the college with a cup of hot coffee made by students
姚偉彬教授喜歡坐在書院的庭院裡，喝一杯學生沖的熱咖啡 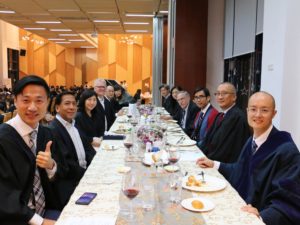 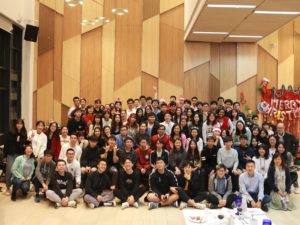