In the field of civil engineering, the University of Macau (UM) has a strong faculty team with a long history of providing professional advice and services to the engineering sector in Macao. Kou Kuan Pang, an associate professor at UM, obtained his bachelor’s degree in civil engineering from the university. After completing his PhD programme in the United Kingdom, he joined the university with a strong desire to contribute to Macao. Over the past 21 years, apart from teaching and research, he has actively worked as an engineering consultant for many local organisations and government departments. He often tells his students: ‘We are all sons and daughters of Macao, so we must serve the community with our hearts.’

Among the First to Graduate from UM’s Civil Engineering Programme

When UM’s Faculty of Science and Technology was established in 1989, it only offered two programmes, one of which was civil engineering, aimed at nurturing local engineering professionals. That was the beginning of the university’s Department of Civil and Environmental Engineering. Prof Iu Vai Pan was the founder and first coordinator of the civil engineering programme. He and the Portuguese lecturer Dr Jose Moita were instrumental in launching the programme. In 1989, the first cohort of ten students were admitted to the programme. One of them was Kou Kun Pang. ‘When I was a student at UM, the university did not have a department of civil engineering, and there were not many teachers,’ says Prof Kou. ‘During those four years, almost all of my major courses were taught by my mentor Prof Iu. He had a great influence on me.’

In 1993, when Kou graduated from the university, Prof Iu expressed his hope that some of his graduates could stay on and continue their research while teaching, so the young scholar with a strong interest in teaching stayed on as a teaching assistant. ‘After a year working as a teaching assistant at the university, I felt that I needed to pursue postgraduate studies in order to further my academic career,’ says Prof Kou. Therefore, he travelled to the UK in 1994 to pursue a master’s degree. ‘At that time, UM was very supportive of its faculty members who wished to pursue further studies overseas, to help them move up in their career. I was given the permission to take a leave of absence so that I could return to teaching after completing my degree,’ says Prof Kou. ‘I remember after my graduation, Prof Iu asked me if I wanted to continue my studies. I said of course but the tuition fees made me hesitant. Fortunately, I received a grant from the Macao government on the condition that I would return to Macao after completing my PhD degree.’

After obtaining his PhD in 2000, Prof Kou returned to UM and has been teaching at the university ever since. Over the past two decades, he has witnessed the growth of the university’s faculty team. Between 1999 and 2008, the percentage of faculty members with a PhD degree increased from 23 per cent to over 70 per cent, and the total number of faculty members increased from 229 to 378. ‘With the support of the government, UM has sponsored a number of its faculty members to pursue further studies to help them move up the ladder. The increase in the size and quality of the faculty team has led to an improvement in the overall teaching quality of the university,’ says Prof Kou. ‘The Department of Civil and Environmental Engineering has also trained a number of local engineers for the Macao SAR government to meet local demand.’

‘With the rapid social and economic development after Macao’s handover in 1999, there emerged many large-scale construction projects in Macao and the infrastructure sector was booming, with a high demand for engineering professionals,’ says Prof Kou. ‘Indeed, engineering companies expressed interest in UM students in their second or third year of college and wanted them to apply for jobs right after graduation.’

Contributing to the Engineering Sector of Macao

In addition to nurturing talent, serving the community through research is also an important mission of the university. In spite of his busy schedule, Prof Kou has been actively involved in the engineering monitoring services of UM’s Centre for Engineering Research and Testing (CERT), providing consultation and advisory services for the Macao SAR government, local organisations, and the community. He has also served as the vice president of the SAR government’s environmental advisory committee as well as a member of its transport advisory committee.

In 2003, the Macao SAR government began to carry out large-scale construction and infrastructure projects one after another. These projects included the Ferreira do Amaral Plaza car park, the Portas do Cerco car park, and the Sai Van Bridge. At that time, the Macao SAR government already foresaw a huge amount of work in terms of project supervision and quality inspection. In order to support these major public infrastructure projects, the university established CERT in that year and combined the technical strength of the centre and the Department of Civil and Environmental Engineering.

‘CERT mainly serves the engineering sector of Macao, and UM has a strong faculty team to provide technical support, including support in inspection and quality control,’ says Prof Kou. ‘Our testing equipment is adjusted by professional companies to ensure accurate and reliable data. Over the past 20 years, CERT has been involved in a wide range of monitoring services in Macao and has built up a reputation in the engineering industry.’

In response to the development needs, UM is planning to restructure CERT into a wholly-owned subsidiary and rename it into UMCERT Engineering Research and Testing Limited, to provide professional services in engineering quality and inspection for the government and the industry in order to promote social-economic development of the city.

Nurturing talent is one of Prof Kou’s greatest achievements in his teaching career: ‘I like to watch students grow from knowing nothing in their first year of study, to being energised by their professional knowledge, to finally learning to be humble again as time goes by. It is my greatest enjoyment to witness the personal growth of my students.’

‘I often tell my students that we are all sons and daughters of Macao, and that serving the local community is something that we have to do with our hearts,’ says Prof Kou. ‘Now that I have gained some experience in social services, my sharing with students will be more convincing and hopefully will help them apply their knowledge in society.’ In terms of expectations for his students, he hopes that apart from contributing to the development of Macao, the graduates will also become pillars of society. 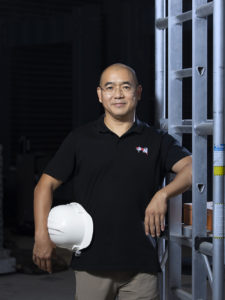 A dinner party organised by the Faculty of Science and Technology in 199 Prof Kou Kun Pang is in the front row, fifth from right
1999年科技學院聯歡晚宴。前排右五為高冠鵬教授

The first autonomous bus in Macao, jointly developed by the FST and other units, was put into use on a trial basis in 2020
科技學院與其它單位合作研發的澳門首架自動駕駛巴士在2020年試行