In the current era of globalization, language gap is considered as one of the challenges for cross-cultural and cross-language communication. Machine translation has played a crucial role in globalization as it overcomes the language gap. According to the China Language Service Industry Development Report, the output value of global language services has maintained an upward trajectory, with a total output value of 46.52 billion US dollars in 2018 and close to 56 billion US dollars in 2021, while more than 360,000 language service enterprises in China. In response to the growth of the market of machine translation, Associate Professor of Faculty of Science and Technology, Wong Fai and his research team have studied Chinese-Portuguese-English machine translation for more than 20 years. Prof. Wong has developed and optimized the translation platform since UM launched the world’s first talking Chinese-Portuguese electronic dictionary (PCT) in 1999. To optimize the translation, he inputted more local specific terminologies and terms commonly used in Macao in order to create higher degree of accuracy for local users. The research on Chinese-Portuguese-English machine translation at UM has always been at the forefront of the world, leading the development of local translation industry and promoting the exchange and communication between Macao and Portuguese-speaking countries.

A major breakthrough has achieved in the research of translation machines since UM established the Natural Language Processing and Chinese-Portuguese Machine Translation laboratory (NLP2CT) in 2009. With the rise of the artificial intelligence technology, NLP2CT keeps pace with the changing times, it launched its latest “Online Chinese-Portuguese-English Computer Aided Translation platform” (UM-CAT). Except for translating the content into three different languages, UM-CAT has higher degree of accuracy as it has knowledge of local and dialect culture. It can translate Macao’s street names, government departments, legal terminology and terms commonly used. For instance, if you type the Chinese name of Avenida de Almeida Ribeiro in Google Translate, it may not produce a satisfactory translation as the translation will turn into “New Road” rather than the street name. But with UM-CAT, you can translate it right away. More professional functions can be found in UM-CAT, including translation memory, terminology management and intelligent assistant prompts. One of the key intelligent functions is creating specific terminology databases which allow user to review the phrases translated in the past. In addition to its intelligent function, there is a function of project management for business users, it enables flexible division of labour for different projects, including translation, reviewing and typesetting. It allows business users to track the translation and review progress effectively. UM-CAT has been widely used in government departments, newspaper office, law firms, other enterprises and institutions since it was launched in December 2018. With its accurate translation, many important Chinese-Portuguese translation projects have been successfully translated by UM-CAT. To further enhance this technology, prof. Wong and his team are currently working on a conference intelligent translation system. This is a tool for translating spoken words into four written languages in real time, including Chinese, Cantonese, English and Portuguese. Machine translation technology can be applied into different scenarios and it is expected to be widely used by general public in the near future.

Research career and achievements over the past 20 years

Looking back to the research career of prof. Wong, he graduated from UM with a bachelor’s degree in Software Engineering in 1995, he kept on studying a master’s degree of Software Engineering in UM and then went to Tsinghua University for a PhD degree. After that he came back to UM and started from the position of research assistant. When discussing about the main motive of studying machine translation, prof. Wong smiled and said, “I didn’t think much about it. I was just interested in it. I am glad to participate into the research of PCT at the beginning so I just wanted to continue the research.” Prof. Wong said that there was no research regarding machine translation in Macao before the handover in 1999. He described the research field in the past was like a “desert” where everything had to start from scratch. Fortunately, Macao has historical background and the advantage of having many Portuguese-speaking talents. Looking back over the past 20 years, the greatest achievement is successfully launched numbers of translation machines, including PCT, a Chinese/Portuguese translation system; the Um2T, an online interactive Chinese/Portuguese machine translation system; and the smart translation platform, UM – CAT etc. In 2017, an English-Chinese machine translation system developed by the research team received the top three prizes as well as the fifth prize at the constraint English-to-Chinese machine translation campaign organized by the 13th China Workshop on Machine Translation. Noting comes easy, same with the journey of doing research, success always comes from steady progress.

A Breeding Ground for Tech Talent

In addition to achieving multiple advancements in machine translation, it is more important to cultivate scientific and technological talents for the society. Prof. Wong shared that machine translation is an interdisciplinary research, including disciplines such as Computer Science, Mathematics and Linguistics. He said, “I will ask students who want to advance in this field whether they really enjoy studying words. It will be difficult for them even if they are passionate with Computer Science but have no interest with words, because machine translation and words are always inseparable. You can be motivated only by something you’re really interested in.” Over the past 20 years, prof. Wong has nurtured many students. One of the UM alumnus, Ao Chi Hong is the core members of the team behind UM-CAT. Ao is responsible for system setup and management of UM-CAT as well as ensuring good user experience. He has worked as a research assistant of prof. Wong after completing his bachelor’s and master’s degrees in Computer Science.

UM alumnus Zeng Xiaodong, who graduated from the master’s degree in E-Commerce Technology in 2012, was involved in some interdisciplinary projects in the NLP2CT while still studying at UM. In 2018, Zeng entered the 35 Innovators under 35 China list released by MIT Technology Review. Many students have achieved great career advancement after graduation, some of them worked at well-known companies such as Tencent and Alibaba. Some of them established their own business, distributing the technology of machine translation to different places.

Today, the translation machines in UM has vigorously promoted the Chinese-Portuguese-English translation works, it assists the economic, cultural exchange between Macao and Portuguese-speaking countries. However, with the rise of innovative technologies such as artificial intelligence and big data, prof. Wong said that there is still a lot of space for the development of multi-language machine translation in the future. There is a high demand and the variety of potential applications, including generating movie subtitles, translation app for personal travelling use, teaching, meeting and conference translations, the vocal conversion tools for hearing impaired and even providing vocal conversion sign tools for the deaf. In the future, prof. Wong will continue to innovate and optimize machine translation, apply this technology into more industries and contribute more to the development of science and technology and local society. 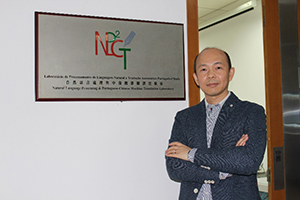 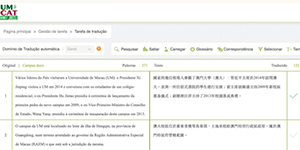 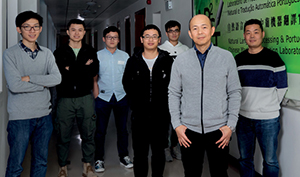 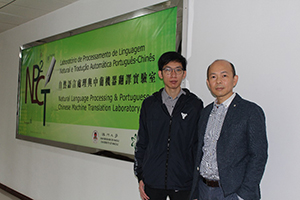