Prof. Yuen Ka Veng is the Dean of Graduate School, Distinguished Professor of the Department of Civil and Environmental Engineering (DCEE) and Academic Leader of the State Key Laboratory on Internet of Things for Smart City. He has held many important positions of UM in the past 18 years, including the Registrar, Head of DCEE, Associate Dean and Interim Dean of Faculty of Science and Technology. After graduating from the Pui Ching Middle School, Prof. Yuen went to Taiwan for his undergraduate studies. Four years later, he pursued his master degree in Hong Kong University of Science and Technology (HKUST). Afterwards, he went to California Institute of Technology, where he obtained his doctoral degree in only 2 years and 7 months. With his perseverance in research career, Prof. Yuen became the first UM scholar to be promoted to full professor before the age of 35 and distinguished professor before age 43. He has achieved great success in his research career.

Be diligent to prepare for the future

FST invited Prof. Yuen for a personal interview to share his academic research and successful experience. When asking the reason on why he chose his research area, Prof. Yuen smiled and said: “I didn’t have much knowledge for the selection at that time. I just knew that I liked Mathematics most.” With a clear and well-defined goal, he determined to embark on the research career when he was an undergraduate student. Therefore, he studied many graduate courses in year 4 as an undergraduate student. He graduated with ranking top 1 over more than 150 students and then went to HKUST for his master studies. He started his research work on the first day upon his arrival. Prof. Yuen is a conscientious and a hardworking person who devoted himself in research even during holiday like Christmas Eve. Compared with other postgraduate students who publish one or two papers during their master study period, Prof. Yuen has published a total of six journal papers during his master studies. He kept a straight A+ record and successfully received the offer from California Institute of Technology where he eventually completed his doctoral degree.

Prof. Yuen returned to Macao in 2002 and was appointed as an assistant professor of the Department of Civil and Environmental Engineering of UM. He was promoted to an associate professor four years later. In 2010, he became the first UM scholar to be promoted to full professor before the age of 35, and in 2018, he became the first professor of UM to be promoted to Distinguished Professor before the age of 43. His specialty is Earthquake Engineering, and his work concerns with the structural health status of bridges, tower and buildings by using their vibration measurements with Bayesian inference. The structural parameters can be back calculated for health status assessment. Prof. Yuen says, ‘structural health monitoring is just like traditional Chinese medicine which determines your health level by checking the pulse. Researchers can also understand the structural health via pulse of structures.’ However, the difficulty of this problem is that there are various types of uncertainties, such as ground motion, wind pressure or even the people/vehicles loadings. When it comes to the most challenging aspects of research, Prof. Yuen says, ‘Civil Engineering structures involves too many unknowns. The construction or foundation materials, such as concrete or rock, have substantial uncertainties and there are other unknown factors like the external loadings. The Bayesian method can be used when you cannot accurately determine the essence of a thing or the value of a variable. It can help you estimate its probability (or probability density) using its response measurements. The research that really made Prof. Yuen famous is his research paper published in 2004 “Model Selection Using Response Measurements: Bayesian Probabilistic Approach” with Prof. James. L. Beck. The paper was published in the Journal of Engineering Mechanics, a flagship journal of the American Society of Civil Engineers, and this paper is the top 10 cited among more than 3,000 papers published in this journal for decades.

Set off a research boom in Bayesian methods

In addition, his single-authored monograph “Bayesian Methods for Structural Dynamics and Civil Engineering” (published in 2010 by John Wiley & Sons, a leading international publishing house) has sparked a boom in Bayesian methods for structural dynamics, which has become a classic in this field. ‘When I wrote the book, I was required to redraw every figure. I also spent a lot of time to make the text perfect and I even revised one of the chapters for more than 30 times,” Prof. Yuen says. Even the reviewers of John Wiley & Sons also admired his conscientious and meticulous. Prof. Yuen is now preparing his second and third books, which he hopes to popularize the Bayesian methods to other areas such as geotechnical engineering and air quality modeling.

Having students all over the world

Since teaching in UM in 2002, Prof. Yuen has nurtured many young talents. Some of them have become professors at well-known universities. Prof. Yuen has witnessed the growth and development of many young people. One of his outstanding students, Prof. Mu Heqing (Max) obtained his Bachelor’s, Master’s and Doctoral degrees from UM. After achieving his PhD, he was employed as an assistant professor at the South China University of Technology. Due to his outstanding research achievements, Max was promoted to associate professor within one and a half year. The papers co-authored by Prof. Yuen and Max have been published in the international journal “Computer-aided Civil and Infrastructure Engineering”, and have achieved outstanding result among more than 120 papers published in the same time, with the second most-cited record. The other outstanding student is Dr. Gilberto Ortiz who is from Colombia. In order to study Bayesian inference, he traveled across the world to UM. Ortiz’s research was successfully completed and published with the best results. He completed his doctoral study within 3 years and became the first PhD graduate of UM from Spanish-speaking countries. For teaching work, Prof. Yuen always spares much effort to guide students to participate in front-line research work. In the old campus of the UM, Prof. Yuen worked with students to monitor the East Asia Building for more than 5 years to study the impact of temperature, humidity and other environmental factors on the long-term structural behavior. They also studied the behavior of buildings under severe weather.

For young people who are looking forward to research career, Prof. Yuen said that diligence is a must. “Don’t expect that you can work less hours but achieve more than the top talents among the world. If one wants to join my area, interest in Mathematics is also necessary.” ‘I have taught at UM for 18 years. I have witnessed that the younger generation is rather different from the previous. I also understand that the younger generation are under great research pressure. The world is developing in a rapid pace and people are more ambitious now.’ Prof. Yuen says. ‘I understand that nowadays young people focus more on the quantity and they want to publish more papers in shorter time span. They also want to cover more research fields. However, there are many papers produced every day in the world, and it is easy to be forgotten. You can only make an impact with substantial and sustainable work.’ Prof. Yuen says. He gave advice to young people, ‘It would be difficult for scholars to achieve results if their outputs are diluted in different fields.’ ‘You will have better chance to be successful when you work wholeheartedly on the specific area where you are good at. You can expand your areas after you become an established scholar.’ 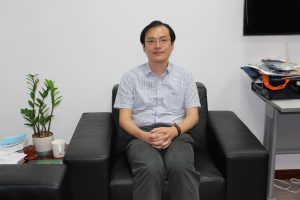 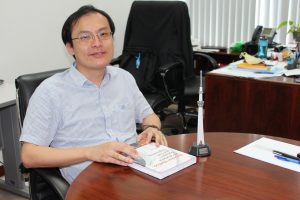 Prof.Yuen and his single-authored monograph “Bayesian methods for structural dynamics and civil engineering”