The Macao SAR government today (18 February) held a ceremony to award decorations, medals, and certificates of merit to individuals and organisations in recognition of their achievements and contributions to society. Chief Executive Ho Iat Seng officiated at the ceremony. The State Key Laboratory of Quality Research in Chinese Medicine (SKL-QRCM) of the University of Macau (UM) and UM Vice Rector Rui Martins were awarded the Medal of Merit – Professions and the Medal of Merit – Education, respectively, in recognition of their outstanding contributions to the fields of Chinese medical sciences and education.

Prof Martins considers the medal to be a significant recognition of his contributions to higher education in Macao, and to UM in particular, over the past three decades. According to him, the medal also means a lot to the State Key Laboratory of Analog and Mixed-Signal VLSI of UM because it is a recognition of the efforts of the lab’s local faculty members who have been working closely and tirelessly in teaching and research to enhance Macao’s international reputation.

The other three UM members who received awards at the ceremony are UM University Assembly member Chui Sai Cheong, Director of SKL-QRCM Wang Yitao and UM alumnus U Seng Pan, who were awarded the Decoration of Honour – Golden Lotus and the Medal of Merit – Industry and Commerce, respectively.

UM members who were present at the ceremony to congratulate the recipients included Rector Yonghua Song, Vice Rectors Michael Hui and Ge Wei, and members of the university’s senior management team. The university thanks the central government, the Macao SAR government, and the community for their longstanding care and support. The Medal of Merit – Professions shows recognition of the university and its members. The university will continue to produce more research results to promote the diversification of Macao’s economy. 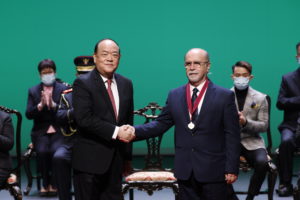 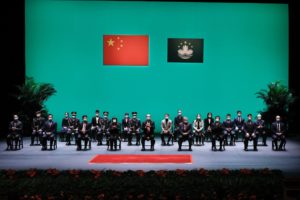 The Macao SAR government holds a ceremony to
award decorations, medals, and certificates of merit
澳門特區政府舉行勳章、獎章和獎狀頒授典禮 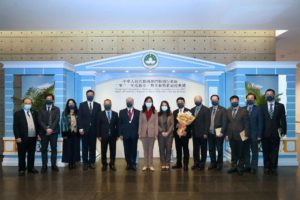