The recipients of the 14th Guanghua Engineering Science and Technology Prize were announced today (30 May), the sixth National Science and Technology Practitioners’ Day, at the 16th General Meeting of Members of the Chinese Academy of Engineering (CAE). The prize is regarded as the ‘highest award in the field of engineering in China’. University of Macau (UM) Rector Yonghua Song made the list for his outstanding contributions to the field of power system operation and control. He is the only scholar of science and technology from Macao to receive the award this year.

The Guanghua Engineering Science and Technology Prize is administered by the CAE and is awarded every two years to honour Chinese engineering experts who have made significant contributions to and outstanding achievements in the fields of engineering technology and engineering management. The prize is regarded by the industry as the ‘highest award in the field of engineering in China’ and has greatly encouraged Chinese engineers and scientists to engage in the research, development, and application of engineering technology. A total of 340 candidates were nominated this year, and 40 awardees were selected after a rigorous evaluation process by nine academic departments of the CAE and the judging committee for candidates from Hong Kong, Macao, and Taiwan.

Prof Song has long been engaged in research studies in the field of power system analysis and control, and has made creative achievements of international leading standards in large-scale projects of new energy consumption and safe operation of the power system. He broke away from the traditional framework of power system regulation where the regulation of power generation follows the change of load. On the new path of exploring the flexible load regulation ability to follow the changes of power generation, he has developed flexible and in-depth regulation technology for regulations systems of industrial centralised load and decentralised load, with high proportion of new energy on the demand side. The research results have been applied in a number of large-scale projects. Prof Song also led the establishment of UM’s State Key Laboratory of Internet of Things for Smart City, which provides substantial support for low-carbon smart technological innovation in the energy sector in the Guangdong-Hong Kong-Macao Greater Bay Area. He is also recipient of a second prize of the State Scientific and Technological Progress Award, four provincial and ministerial first awards, and the prize for Scientific and Technological Progress from the Ho Leung Ho Lee Foundation. 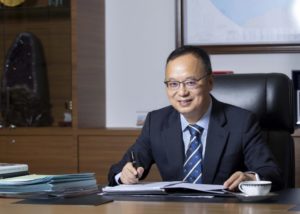