An award ceremony for winners of the 2020 State Scientific and Technological Progress Award was held today (3 November) in Beijing. Party and state leaders, including Xi Jinping, Li Keqiang, Wang Huning, and Han Zheng attended the ceremony and presented the awards to the winners or their representatives. The project titled ‘Key Technologies and Applications of Demand-side Load Regulation of Power Systems with a High Proportion of New Energy Sources’, of which University of Macau (UM) Rector Yonghua Song is the first author, won a second prize of the State Scientific and Technological Progress Award for the year 2020.

The power sector is the largest single contributor to China’s carbon emissions (accounting for about 37 per cent of the country’s total carbon emissions). The development of new sources of clean energy represents a global trend towards low-carbon energy systems. By the year 2020, China is estimated to have the world’s largest installed capacity for wind and solar energy (530 million kilowatts), which will account for 24.3 per cent of total installed capacity worldwide. Moreover, this capacity is projected to maintain rapid growth over the next 30 years.

The instability of large-scale new-energy-based power generation requires the power system to provide flexible regulation resources to balance the instability. However, the current capacity, speed, and accuracy of regulating resources on the generation side, as is the case with thermal power, are no longer sufficient to support high-proportion new energy access.

Rector Song’s team achieved a number of breakthroughs with their award-winning project: They proposed a new pathway for flexible load regulation capacity to follow the changes in power generation; they developed innovative theories and methods; they invented key technologies; they built a demand-side load regulation system containing a high proportion of new-energy-based power systems. Not only has this system found extensive applications in China and abroad (it has been successfully used in the power transmission grids in 11 provinces and cities in China), but it is also expected to play a major role in supporting China in the realisation of its ‘Dual Carbon’ goals (which refer to China’s two climate goals announced by President Xi at the 75th session of the United Nations General Assembly in September 2020) and in supporting Macao’s low-carbon development strategy.

Rector Song has been long engaged in research on power system analysis and control, and he has attained world-class achievements in large-scale new energy consumption and safe operation of power systems. In recent years, he has received four first prizes of the State Scientific and Technological Progress Award in the natural sciences category and the scientific and technological progress category at the provincial or ministerial level as the first author, as well as the Prize for Scientific and Technological Progress in the category of mechanical and energy technologies from the Ho Leung Ho Lee Foundation. In 2018, he founded the State Key Laboratory of Internet of Things for Smart City at UM, which later passed the inspection by the Ministry of Science and Technology. He is currently leading a key research project commissioned by the Science and Technology Development Fund of Macao; the project aims to contribute to the realisation of carbon neutrality goals in Guangdong, Hong Kong, Macao, and key cities in China. Due to epidemic prevention requirements, Rector Song was unable to attend the award ceremony in person. 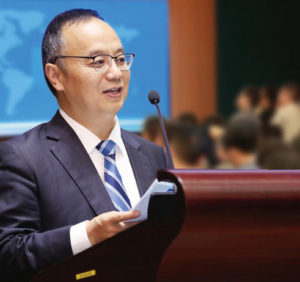 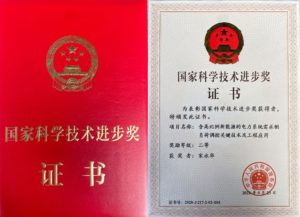 The certificate of recognition
獲奬證書