Students from the Department of Electromechanical Engineering, Faculty of Science and Technology (FST), University of Macau (UM), led by Senior Instructor Lao Seng Kin, recently won the top three prizes in both the group category and the individual category, in the university section of a paper plane contest. This is the fourth consecutive year that UM students have won the championship at this competition.

The contest was organised by the Macao Innovation & Invention Association (MIIA). More than 300 students from 34 higher education institutions and high schools in mainland China, Hong Kong, Macao, and Taiwan participated in the contest.

At the longest airtime (individual) contest, Lei Hin Chon won the first prize and broke Macao’s record at the competition by keeping his paper plane in the air for 16.27 seconds. Chan Ngai Hang and Lao Chi Fai won second and third prizes, respectively. 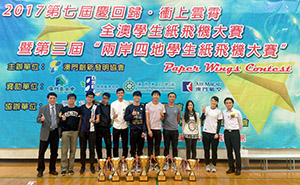