The University of Macau (UM) Faculty of Science and Technology (FST) recently held a closing ceremony for its Summer Camp 2017. This year’s summer camp attracted 140 students from 26 secondary schools in Macao. Some participants say that they have learned a lot of scientific knowledge that could be applied to their daily lives, adding that they hope to pursue further education in the same field.

Lee, a participant who is interested in wireless technology, met many like-minded friends in the camp and learned more about the latest technologies and products in wireless technology. Having experienced UM’s campus life, Lee thinks that the university provides a very good environment for teaching and research and hopes to study at UM after graduation. Chen, another participant in the summer camp, is a robotics enthusiast. He says the camp provides an opportunity for him to learn more about the science behind artificial intelligence and the basic operations of robots, which he cannot learn from his classes in school. He adds that the group discussions allowed students to learn from each other, and hopes to study robotics when he starts college.

Guests who attended the closing ceremony included Tam Kam Weng and Wong Pak Kin, associate deans of the FST; Yang Zhixin, assistant dean of the FST; and Samuel Chan Wan Hei, a member of the Macao Science and Technology Development Fund (FDCT)’s Administrative Committee. In his speech, Yang said he believed that the participants were able to discover their interest in scientific research and broadened their horizons through the various experiments and activities in the camp. He added that many start-up companies got their inspiration from science and technology and try to integrate them into their products to improve the quality of people’s lives. The summer camp was sponsored by the Macao Science and Technology Development Fund. 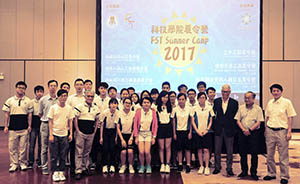 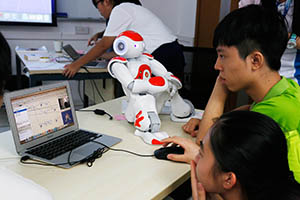